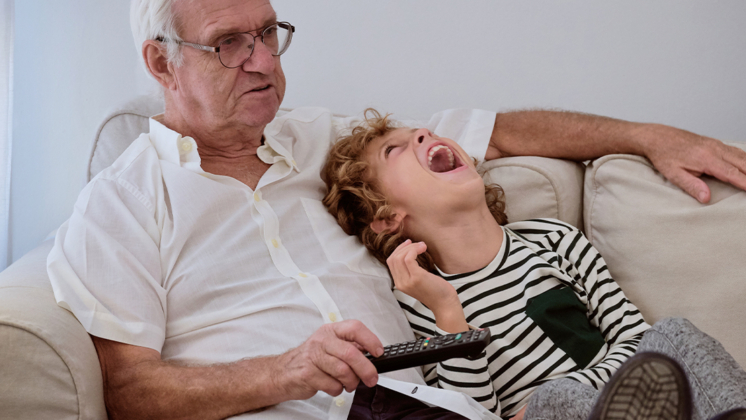 As the ultimate admirer of classic TV shows, rarely a day has passed in years that I have not watched my favorite sitcom, I Love Lucy. Through the decades and in this current era of “Peak TV” (where over 500 original scripted series compete for eyeballs each season), nothing can compare to the relatable, innocent, escapist and purely funny antics of television’s favorite fictional quartet: Lucy and Ricky Ricardo and Ethel and Fred Mertz.

So, what can I tell you about I Love Lucy that you don’t already know?

For starters, it debuted on this day in 1951, which makes I Love Lucy 68 years old. In one of my favorite episodes (“Lucy Tells the Truth,” originally telecast on Nov. 9, 1953), Lucy as Lucy Ricardo states she is 33 years of age. But the real Lucy was 42, which would have made her 40 when the sitcom began. Desi Arnaz (Ricky) was 34 at I Love Lucy’s inception, and, in one of the biggest age gaps of any married TV couple, William Frawley (Fred) was 64 and Vivian Vance (Ethel) was 42.

TV at the time of the ‘I Love Lucy’ premiere

Back in 1951 there were actually four networks: ABC, CBS, NBC and DuMont, which launched in June 1942, dissolved in August 1956 (and is known for introducing The Honeymooners sketch on variety series Cavalcade of Stars and the first science fiction series, Captain Video and His Video Rangers).

Minus competition from cable and digital, the lead-in program was of the utmost importance for any new TV series. I Love Lucy immediately benefited by the support from Arthur Godfrey’s Talent Scouts (which was scheduled in the Monday 8:30 p.m. ET half-hour into I Love Lucy). By season-end in 1951-52, Arthur Godfrey’s Talent Scouts topped the charts (with season one of I Love Lucy third overall behind NBC variety showcase Texaco Star Theater).

By season two, I Love Lucy inherited the top spot in all of primetime, never ranking below No. 3 overall for any of its six seasons and ending its run as the most-watched series on television. Only two other series (both sitcoms) accomplished that feat: CBS’ The Andy Griffith Show and NBC’s Seinfeld.

Additionally, I Love Lucy holds the record for the highest household rating in a season for any TV series historically with a 67.3 rating in season two (1952-53). Comparably, the top-rated entry in primetime this season, NBC’s Sunday Night Football, is averaging an 11.6 rating.

And it set the stage for CBS’ decades-long strategy of successfully airing sitcoms in the Monday 9 p.m. half-hour. Think The Danny Thomas Show (originally titled Make From For Daddy), The Andy Griffith Show, Mayberry R.F.D., Maude, All in the Family, M*A*S*H, Kate & Allie, Newhart, Murphy Brown, Cybill, Everybody Loves Raymond, Two and a Half Men, 2 Broke Girls and Mike & Molly.

Originally titled The Lucille Ball-Desi Arnaz Show, The Lucy-Desi Comedy Hour was a series of 13 hour-long episodes showcasing the continued escapades of the Richardos and the Mertzes. It aired sporadically from 1957 to 1960.

In 1959, Lucy and Desi returned the favor by guest-starring as the Ricardos on the episode of The Danny Thomas Show titled “Lucy Upsets the Williams Household.”

1. I Love Lucy was the first TV sitcom to be filmed with three cameras on 35-mm film in front of a live audience, which defined the genre. At a time when repeating any series was unheard of, Lucy’s pregnancy in season two resulted in rebroadcasting some prior episodes, which proved a success in the ratings and resulted in the formula for off-network syndication.

2. I Love Lucy was the first television series to feature an interracial couple. Desi Arnaz was of Cuban descent, which was an initial concern by CBS. But Lucy was adamant that the series include Arnaz.

The censors did not allow the writers on ‘I Love Lucy’ to use the word “pregnant.” “Expecting” was the agreed upon phrase.

3. The censors did not allow the writers on I Love Lucy to use the word “pregnant” when Lucy’s pregnancy in real life resulted in the same situation for Lucy Ricardo in season two. “Expecting” was the agreed upon phrase to describe Lucy’s pregnancy. The first TV series to feature a TV pregnancy, however, was a little-known entry called Mary Kay and Johnny, featuring real-life married couple Mary Kay and Johnny Stearns. It aired from 1947 to 1950.

4. Dwight D. Eishenhower’s presidential inauguration drew 29 million viewers in January 20, 1953. The next day, 44 million viewers tuned in to watch Lucy give birth to little Ricky, which accounted for 72% of all TV homes at the time. In real life, Lucy gave birth to Desi Arnaz, Jr. on the same day Little Ricky was born.

5. Bea Benaderet was the first choice to play Ethel Mertz, but was unavailable due to her her role as Blanche Morton on The George Burns and Gracie Allen Show. Benaderet, however, guest-starred in season one episode “Lucy Plays Cupid” (originally telecast on Dec. 13, 1951).

6. Barbara Pepper, who is remembered as Doris Ziffel on sitcom on Green Acres, was also considered to play Ethel. Pepper in real life was Lucy’s personal friend, and she ultimately appeared in 10 episodes of I Love Lucy (including season one’s “Beaking the Lease,” originally telecast on Jan. 5, 1952).

7. Lucy’s eventual sidekick, Gale Gordon, was the first choice to play Fred Mertz, but was contacted to sitcom Our Miss Brooks.  Gordon, however, appeared twice as Ricky Ricardo’s boss, Alvin Littlefield, owner of the Tropicana Club where Ricky’s band played, and later as a judge on an episode of The Lucy-Desi Comedy Hour.

8. Despite the aforementioned 22 year age difference, William Frawley as Fred on camera with TV wife Ethel seemed like the perfect fit. On the contrary, according to Stanley Livingston, who played Chip Douglas on My Three Sons (which featured Frawley as Francis “Bub” O’Casey in the first five seasons on ABC).

“Bill was not shy telling me all the reasons why he does not care for Vivian Vance,” Livingston told me years ago for a story I wrote for CBS Watch magazine. “And, in hindsight, I was only about 10 or 11 years old at the time. He had plenty to say.”

9. William Frawley was not the only I Love Lucy connection to My Three Sons (and to Stanley Livingston). Doris Singleton, who played Lucy’s frenemy Caroline Appleby also portrayed Margaret Williams, the mother of Polly (Ronne Troup), Chip’s wife, on My Three Sons. Earlier on My Three Sons, Singleton portrayed the mother of Meredith MacRae, whose character married original oldest son Mike (Tim Considine).

11. Talk of a proposed spin-off called The Mertzes after I Love Lucy (and before The Lucy-Desi Comedy Hour) were squelched because Vivian Vance no longer wanted to work with Frawley.

Had The Mertzes moved forward, it would have been the first spinoff series in history television. That honor now goes to CBS comedy Pete and Gladys, starring Harry Morgan and Cara Williams, which was introduced on an episode of December Bride. Morgan is best remembered for his eight season stint as Col. Sherman Potter on CBS’ M*A*S*H.

13. Keith Thibodeaux, now 68 and billed as Richard Keith on I Love Lucy, segued from the sitcom as Little Ricky to 13 guest appearances as Opie’s (Ron Howard) friend Johnny Paul Jason on The Andy Griffith Show from 1962 to 1966. In 1964, he made a cameo appearance on The Lucy Show.

14. William Frawley’s final TV appearance was in a 1965 episode of The Lucy Show titled “Lucy and the Countess Have a Horse Guest.”  “You know, he reminds me of someone I used to know,” noted Lucy as Lucy Carmichael to guest star Ann Sothern.

‘I Love Lucy’ at its finest

At Lucy’s insistence, Ricky asks his boss Mr. Littlefield (Gale Gordon) for a raise, which lands him on the unemployment line. Determined to get Ricky’s job back, Lucy, with the Mertzes’ help, book every table at the Tropicana and disguise themselves as clubgoers who become irate and storm out when they hear Ricky has been let go. Who could forget Lucy as a Marilyn Monroe lookalike or Fred in drag?

After a difficult night with Little Ricky, upstairs neighbor Mrs. Trumbell (Elizabeth Patterson in her first of 11 episode appearances on I Love Lucy) reminds landlord Ethel that the apartment lease says no children are allowed. “Don’t worry Lucy, we can rent that apartment just like that,” says stern Ethel to angry Mrs. Trumbell. “And even if we couldn’t, it wouldn’t matter because my friendship with the Ricardos means more to me than all the money on Earth.”

Ultimately, Lucy gets tired of hearing Ethel retell that incident. The two have a fight. Ricky and Fred step in, only to have a squabble themselves. And by episode end the two couples make up and Lucy now has a built-in babysitter for Little Ricky.

After Fred asks Lucy to choose something special for him to give Ethel for her birthday, she picks the those riduluous hostess pants. “I wanted a toaster,” complained Ethel after she discovers the gift, leading Lucy to storm out as she proclaims…”I hope you live another 75 years!” Of course, Lucy and Ethel ultimately make up by episode end, which is always a staple on I Love Lucy…a happy ending.

En route to Los Angeles by car, the Ricardos and Mertzes pull into a rundown establishment run by a proprietor named Mr. Skinner (Olin Howland), who offers the foursome accommodations in a broken down single-room cabin (that rattles every time the noisy train passes). Remember Ethel exiting the bathroom with toothpaste all over her face?

Interesting footnote: In the next episode, “Tennessee Bound” (Nov. 18, 1954), eventual mega-producer Aaron Spelling has a bit part as a gas station attendant. “I started out as an actor,” Spelling once told me. “But the work was not steady and fate took me to another direction. Eventually, I ended up working again with Lucy on Life With Lucy.”

Life With Lucy, produced by Aaron Spelling, was Lucy’s fourth regularly scheduled sitcom. Unlike her prior three hits, it only lasted for one half season, this time on ABC in the fall of 1986.

Eight years after guest-starring on I Love Lucy, Barbara Eden, now 88, began her legendary role on NBC’s I Dream of Jeannie.

‘I Love Lucy’ at Present

“The comedy was not topical, which is why it holds up today.”
–Lucie Arnaz

“The secret behind the success of I Love Lucy was the reliability of the characters,” Lucie Arnaz once told me in an interview. “The humor was within the friends and the family, and the kinds of wants and desires that everyone has and everyone can understand. The comedy was not topical, which is why it holds up today. And what you saw in Lucy, Ricky, Fred and Ethel were probably similar to people you know in real life. It felt real.

“Naturally, everything was happily resolved by episode end,” she added. “And it was just plain funny. We still laugh at I Love Lucy today, and we probably always will.”