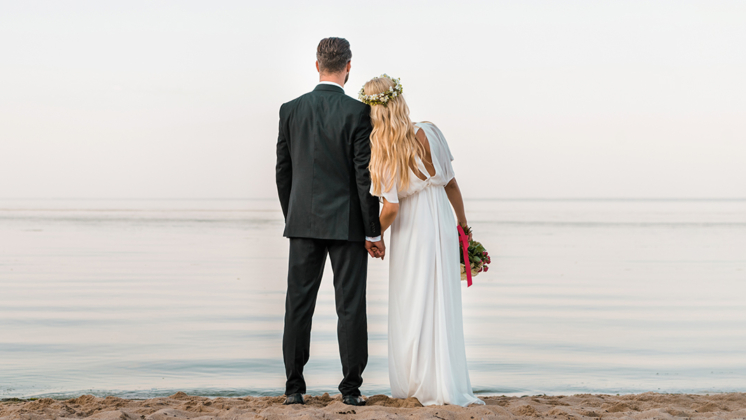 How you know them: She’s The Closer. He’s the baby-faced star of FOX’s The Following, along with dozens—hundreds? thousands?—of movies like Footloose, Apollo 13, and Mystic River.

How they met: Filming the play Lemon Sky for PBS in the late ‘80s. Sedgwick wasn’t too fond of Bacon at first (“He wasn’t very friendly, he had an attitude.”), and he knew it (“I was more into her than she was into me. I think she found me cocky and pretentious.”). He asked her out a few times. She eventually broke down, and they married months later.

How you know them: He’s played Marty McFly, Alex P. Keaton, and many more all-American wiseasses. She’s a film and TV actress whose most notable role was playing Fox’s girlfriend on Family Ties. They’re both heavily involved in funding research for Parkinson’s Disease, which Fox has been battling since 1991.

How they met: Well, it was on Family Ties—but nothing happened at first. The couple told Oprah:

POLLAN: It wasn’t that I wasn’t attracted to him—I was just dating someone else.

FOX: And it wasn’t that I wasn’t attracted to her—the guy she was dating was just bigger than me.

They officially began seeing each other in 1987, while filming Bright Lights, Big City.

How you know them: He’s in every movie you’ve ever loved, plus Bosom Buddies. She’s a prolific actress herself, most recently appearing as the high-maintenance Evie on HBO’s Girls.

Three years later, Hanks starred with her in Volunteers, and sparks flew. In time, Hanks left his unhappy marriage, and Wilson broke up with her fiancée, claiming, “I didn’t know what being in love was until I met Tom.” The couple wed in 1988.

How you know them: Hall is a former Saturday Night Live cast member and current behind-the-scenes TV pro. And she’s … aw, come on. You know who she is. If not, this should help jog your memory.

How they met: In college! Both were heavily into the comedy scene at Northwestern University. In 1982, their troupe, the Practical Theater Company, attracted the attention of SNL’s then-producer, Dick Ebersol, who hired all four members right out of school. Julia’s been with Hall ever since. “Brad was the right guy, and he’s remained the right guy,” she says.

How you know them: He’s the star of NCIS, Chicago Hope, and St. Elsewhere. She played Mindy in Mork and Mindy, and the lead in My Sister Sam.

How they met: Famously private about their relationship, rumor has it the pair hooked up at a party in March of 1986, two months after Harmon was named People Magazine’s Sexiest Man Alive.

(From that interview: “When I marry, I want it to be everything this town says it can’t be. I’m not into catting around.”) They were engaged by summer’s end and wed the following March.

How you know them: She’s a TV and movie star, as well as the spokeswoman for Activia yogurt. He’s the brilliant director of improvised comedies like Waiting for Guffman and Best in Show.

How they met: Years before their official first date, Curtis saw a picture of Guest in Rolling Stone—dressed like this, promoting This is Spinal Tap—and said to a friend, “I’m going to marry that man.” She cold-called him, and he never called back.

Months later, they locked eyes at a Hollywood restaurant called Hugo’s. He phoned the next day, and they walked the aisle less than six months later.

How you know them: She’s a model and two-time cancer survivor. He’s the hard-living lead guitarist for the Rolling Stones. Together, they have two daughters, Theodora and Alexandra, also models.

How they met: The first time was in 1979, when he scored champagne for her at Studio 54; they hooked up for good at Richards’ 36th birthday party months later. Hansen describes him as a romantic, sending her mixtapes and letters “written with his own blood.”

And though her parents weren’t pleased at first—especially after Keef drunkenly wrecked his guitar on their dining-room table—the couple married in 1983, with Mick Jagger playing best man.

How you know them: She’s a rock manager and the bawdy, delightful co-host of The Talk. He’s the Prince of Darkness.

How they met: Sharon’s father, Don Arden, was famously managing Black Sabbath when his 17-year-old daughter first met frontman Ozzy Osbourne in the early ‘70s. By 1979, Ozzy was a solo act, Sharon was his lover and manager, and the rest … is bat-biting, drug-and-alcohol-fueled, reality show history.

How you know them:She’s Carrie Bradshaw from Sex and the City and he is best known for…. Anyone? Anyone? … Bueller?… Bueller?

How they met: Broderick and Parker first met in 1991, introduced by Parker’s brothers. They took things slowly, and didn’t tie the knot until 1997 in a small wedding.

Despite some recent negative press, the couple just celebrated their 22 years of marriage.

How you know them: She might be the greatest living actress; star of Sophie’s Choice and The Devil Wears Prada. He is a famous sculptor.

How they met: The longest tenured relationship on this list, the couple met in 1978 under unfavorable circumstances. Streep’s boyfriend, John Cazale, passed away, and she turned to her brother’s friend, Gummer, for support.

Six months later, they got married. Despite the short courtship, they have enjoyed a long and happy marriage. They have four children.

How you know them: He’s best known for his starring role in Wolverine. She is a famous Australian Actress in her own right.

How they met: Despite his recent fame, when Jackman and Furness first met on the set of Australian dram Corelli, she was the star. “She was the star. I had this major crush on her,” Jackman told Ellen DeGeneres back in 2016.

Despite the age difference, Jackman knew within two weeks that he wanted to spend his life with her and proposed just four months later.

How they met: Even though they never married, after 36 years together, we thought they deserve an honorable mention. The pair first met on the set of the set of The One and Only, Genuine, Original Family Band in 1968 when Hawn was 23 and Russell just 17.

Afterward, they lived their separate lives, both getting married to others before eventually divorcing. 15 years after they first shared the stage they were back together in an audition for Swing Shift.

It wasn’t exactly smooth sailing when they started dating. On their first date involved getting the police called on themselves while breaking into Hawn’s newly purchased home when she forgot her key.