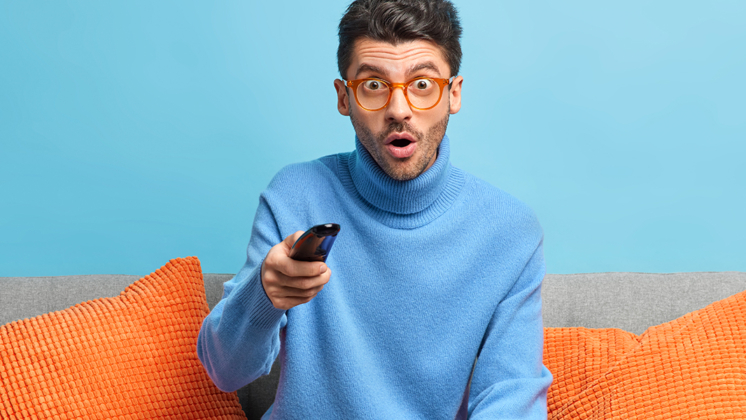 If you are anything like me, your programming choices not only entertain you, they can sometimes offer comfort as well. So, as we deal with the coronavirus COVID-19, I would like to suggest some TV series — past and present — that will offer just that…escape and entertainment (and, in the case of TLC, just plain shock value). These shows are listed in no particular order, and they are all available at present to either watch on a broadcast or cable network or to stream.

Of course, if you are not already a subscriber to Disney+, there is no better platform for family-themed entertainment. And, to keep you smiling in this difficult time, let’s start with what has to be the funniest TV show on the air at present.

At this point, I don’t know how these guys — Joe Gato, James “Murr’ Murray, Brian “Q” Quinn and Sal Vulcano — are not getting recognized in the show’s comedic set-ups in public. But, this modern-day version of The Three Stooges + 1 (minus Moe slapping the others!) will, hands down, have you laughing out loud. There isn’t anything these guys won’t do. And, truTV’s top-rated show (and, at present, a feature film), it seems to run all the time!

Neurotic and nitpicking, could you imagine Larry David’s reaction to coronavirus? The epitome of the person you know who just pushes your buttons, Larry has been pondering life’s little annoyances on Curb Your Enthusiasm for 10 seasons. That gives you 100 episodes to take a look at life Larry David style. For coronavirus, he would need a super-sized episode…or two!

Like any Chuck Lorre comedy, the emphasis is on an odd couple of sorts, this time Michael Douglas as Sandy Kominsky, an aging actor who runs his own acting studio, and Alan Arkin as Norman Newlander, Sandy’s agent and best friend.

Norman, unfortunately, is facing the recent death of his beloved (and wise) wife Eileen (Susan Sullivan) and his strained relationship with daughter Phoebe (Lisa Edelstein), who goes back into rehab to fight a pill addiction. And Sandy is ultimately diagnosed with cancer, which he does not immediately reveal. Together, these friends — Sandy and Norman — support each other in this unusual pairing. And, unlike the typical Lorre sitcom, there are no comically cliché characters. It all feels real, and is worthy binging on in these 16 episodes (through season 2).

Speaking of Susan Sullivan: Remember her role as do-gooder Maggie Gioberti on CBS’ soapy Falcon Crest? The first four seasons of the 1981 to 1990 drama are available for streaming at a cost per episode at Amazon Prime.

4. Shameless (Showtime – all 10 seasons available at Showtime On Demand )

You think your life is bad at the moment? Well then, let’s check in with the Gallaghers, led by a boozing irresponsible father Frank (William H. Macy). Frank is left alone by his drug-addicted wife Monica (Annabelle Apsion) to raise their six children: Fiona (Emmy Rossum), “Lip” (Jeremy Allen White), Ian (Cameron Monaghan), Debbie (Emma Kenney), Carl (Ethan Cutkowsky) and Liam, who when we first meet is still in diapers.

Unfortunately, Frank is not capable of taking care of his brood, so the oldest, Fiona, steps to the plate. Through 10 seasons…deep breath…Fiona has a series of failed relationships and jobs, ultimately following in her father’s path until she decides to start a new life elsewhere at the end of season 9; “Lip,” the brightest intellectually of the brood, has his share of bad relationships and is now the unmarried father to a young son; Ian comes out of the closet and ultimately hooks up, and marries, troubled Mickey (Noel Fisher); Debbie has a baby at 15 and follows in her father’s scheming footsteps; angry Carl is headed down a dangerous path with a destructive streak; and Liam; now almost a teen, is becoming as conniving as any of the Gallaghers.

Is is family dysfunction at its finest on Shameless, chock full of drama and laughs, and complete with next-door neighbors Kevin (Steve Howey) and Veronica (Shanola Hampton). After, after 10 seasons, there are 122 episodes of Shameless to binge

Yes, there was some backlash from the fans in season three (which, quite frankly, I don’t personally get). But this nostalgic late 1950s/early 1960s-set tale of an upscale housewife (Rachel Brosnahan as Midge) pursuing a career as a stand-up comedian is simply one of the best written, acted and produced series in television history. And who doesn’t love Emmy-winning Alex Borstein as Midge’s foul-mouthed agent, not to mention Midge’s parents Abe (Tony Shalhoub) and Rose (Marin Hinkle), who basically find themselves homeless in season three?

Honorable Mention: Amy Sherman-Palladino, who created The Marvelous Mrs. Maisel, has an earlier hit chock full of quirky characters and set in the warm and homey town of fictional Stars Hollow: Gilmore Girls. The 2000 to 2007 (153 episode) dramedy was revived on Netflix as four-hour miniseries Gilmore Girls: A Year in the Life in 2016, and is available to watch on Netflix and cable network UP TV.

In this British combination of comedy and drama, an awkward teenage boy named Otis (Asa Butterfield) with a sex therapist mother (Gillian Anderson), already nervous about the subject, teams up with a high school classmate (Emma Mackey) to set up an underground sex therapy clinic at school. By season two, Otis finds himself dealing with the reality and pressures of his high school romance.

Set at fictional Moordale High amid the greenery of a Wales town, Sex Education feels, in parts, like a modern-day British version of The Breakfast Club, with likeable and relatable characters and situations we ourselves may have faced. For anyone of a certain age, it is a reminder of those often tender and innocent high school days.

There are two seasons (and 16 episodes) of Sex Education to binge.

Admit it…you have not been watching the ongoing exploits of the animated clan named Simpson — Homer, Marge, Bart, Lisa and Maggie — in recent years. But you are certainly familiar with them, you have enjoyed the now classic half-hour in the past, and you would not mind a revisit. That said, as the longest running animated sitcom in television history, there are now over 600 episodes to enjoy.

Yes, there is nothing like some of this relationship-themed mishigas (translation: craziness) to get you through any troubled time. And recent Netflix entry Love Is Blind, a prime example, features a total of 30 men and women looking for love TV style who, for 10 days, initially communicate without seeing each other in different “pods.” Whenever they decide, the men are able to propose to the woman they want to get married to. This results in a face-to-face meeting as an engaged couple for the first time. Then they get to meet each other in a couples retreat in Playa del Carmen, Mexico.

No, I don’t make this stuff us. And, yes, watching this pure nonsense is oddly addictive. If you like ABC’s The Bachelor (and, based on the ratings for this just concluded season, many do), Love Is Blind is another alternative.

You know those things in life that happen, leading you to wonder…why me, why us, or why them? One look at any of these TLC entries and you will quickly realize you don’t have it that bad after all! All are oddly addictive, and all are available in their current seasons on the cable network and for streaming on Hulu.

14-15. The Waltons (MeTV, INSP and Hulu) and Little House on the Prairie (Cozi TV, Hallmark Channel)

Once upon a time, the emphasis in primetime drama was on large families that actually loved and supported each other. And there are no better examples than The Waltons, which aired on CBS from 1972 to 1981; and Little House on the Prairie, which ran from 1974 to 1983.

No matter what each family faced — struggling economic times, health scares, fires and storms, unwelcome intruders, and, in the case of Little House on the Prairie, that hilarious uppity mother and daughter, Harriet (Katherine MacGregor) and Nellie Oleson (Alison Arngrim) — love conquered all. The recipe was a cozy feeling and a happy ending. And, as a bonus, there are even TV movies — six for The Waltons and three for Little House on the Prairie — to binge on.

Sure, you have probably seen each of the 180 episodes 10 times already. But who wouldn’t want to revisit everyone’s favorite redhead, Lucille Ball, as she gets drunk on Vitameatavegamin, works in a candy factory, brawls with a local in a wine vat in Italy, and wears some kind of a kooky disguise in those countless hilarious episodes? Together with hubby Ricky (Desi Arnaz) and best friends Ethel (Vivian Vance) and Fred (William Frawley), there is no better classic sitcom than I Love Lucy to revisit with.

Of course, if you would like another classic sitcom alternative, head to MeTV, TV Land, Cozi TV, Antenna TV, or any of the available digitnets in your area. There are plenty to choose from!