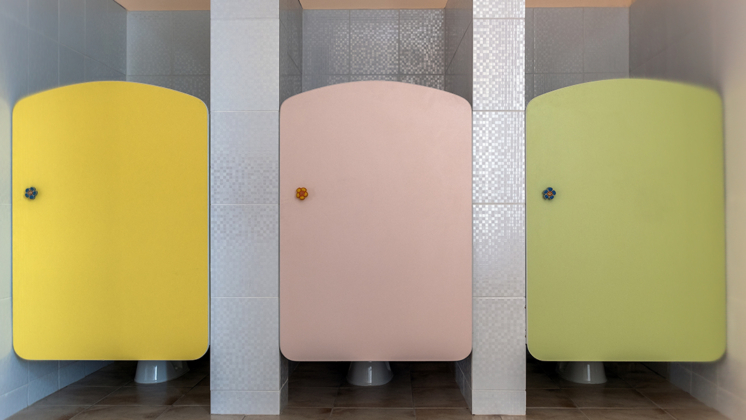 There are many mysterious things in life — but there are a handful that would be missed if not pointed out. For instance, why are public toilet seats shaped like a U, while private ones are O-shaped? Were you even aware of the disparity until this very moment?

What’s up with the gap?

The U shape of public toilet seats is known as an open-front toilet seat. According to Mental Floss, it’s basically required for public restrooms under the American Standard National Plumbing Code. The code was created in 1955 and further reinforced by the 1973 Uniform Plumbing Code put in place by the International Association of Plumbing and Mechanical Officials (IAPMO).

The code states: “Water closets shall be equipped with seats of smooth non-absorbent material. All seats of water closets provided for public use shall be of the open-front type.”

Why, you ask? Well, it all comes down to hygiene.

Both of the plumbing rules rationalized that if there’s an open front on public toilet seats, it’s less likely that your private parts will come into contact with germ-ridden ceramics.

Moreover, the public toilet seat was designed with women in mind. Lynne Simick, the senior director of code development at IAPMO told Slate that the U-shaped seat “allows women to wipe the perineal area after using the toilet without contacting the seat.”

Also, it’s less likely for men to spray the actual seat while they’re doing their business, though it’s widely known that this isn’t always the case.

So, now you know the story behind public toilet seat shapes. Perhaps now you’ll feel compelled to get a U-shaped throne for your home toilet, because since when do family members have less germs than strangers?

Conn pointed out that just the penalties for readmitting 150 patients is about $500,000 per year. By contrast, the total cost of providing 150 patients with monitored toilet seats would be $200,000.