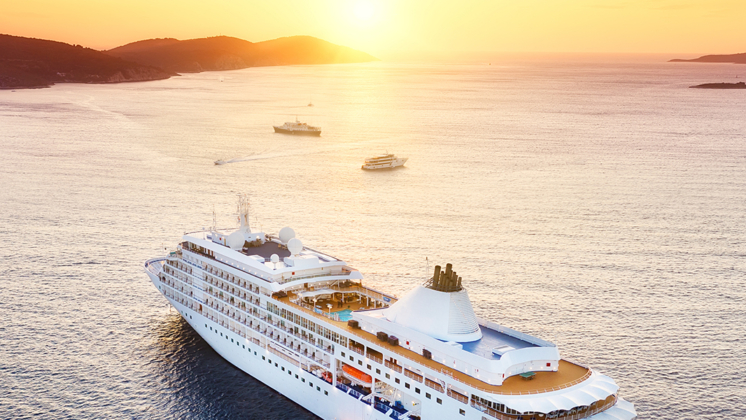 If you’ve ever taken a cruise, you’ll know that every ship has its own unique features. Some have zip lining, indoor climbing walls, planetariums — the list is endless. However, there is one feature that nearly all ships share, and that involves the color red.

Most ships are painted red below the waterline and have a series on numbers painted on the bow. The reason? An old maritime tradition.

Save our (wooden) ships

Up until the 19th century, ships were made out of wood. It was only in the 1800s that iron and steel ships were introduced, and sails were replaced with steam engines. Wooden ships had to be protected from wood-eating worms, barnacles and seaweed, so the sailors covered the hull of their boats with copper paint to protect the vessel.

It was the copper that added a red tint to the paint. By creating this protective layer, ships wouldn’t be weighed down by creatures and plants attaching themselves to the bottom of the ship. This was important, as anything attached to the ships’s hull could increase the drag and slow the ship down, which would also require more fuel.

These days, ships’ hulls are painted with copper-oxide-bearing paints — none of which need to be red — but many continue to be to honor this nautical tradition.

You may also have noticed that, towards the bow of the ship, numbers are painted vertically, usually in white paint. These numbers help sailors understand how much load a ship is carrying. The more load that’s onboard, the lower in the water the ship will sit, and the higher number will be revealed. This can help them calculate how much fuel is required for the voyage.

Next time you’re on a cruise, you can wow your fellow passengers with your nautical expertise. And don’t forget to check out our recent article on the perfect job for men over 40 who wish to travel the world by cruise ship.