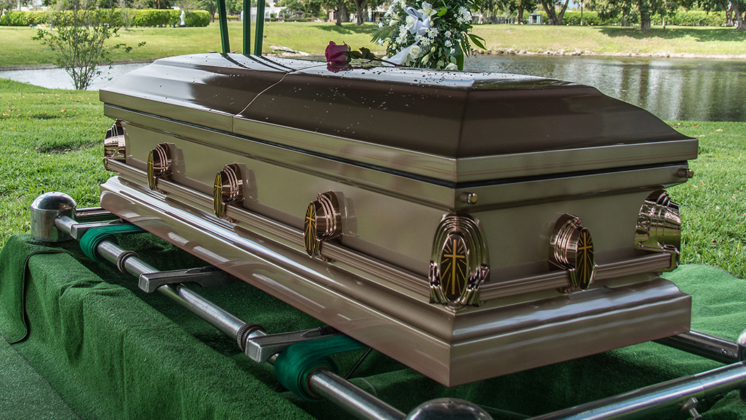 A funeral is traditionally seen as a somber time of reflection and sadness, a time for family and friends to come together to grieve for their loved one. But Shay Bradley, a Dublin man who died earlier this month at age 62, had other ideas.

Instead of tears of sadness, Bradley was banking on tears of laughter as he set up a graveside prank so epic, it immediately went viral all over the internet.

As Mr. Bradley’s coffin was lowered into the grave, suddenly a voice seemed to emanate from the casket. “Hello?” he said, followed by a loud banging. “Let me out, it’s dark in here!”

At first, people seemed to be confused as to what was happening, but soon laughter started to erupt from the crowd. Ever the jokester, Mr. Bradley had pre-recorded himself a year earlier in preparation for the moment.

As Anne Bradley, Shay’s wife, told Bored Panda, “My son told me about the recording the day before his funeral,” explaining that the closest family were aware of the recording. A video of the graveside goofing immediately went viral. It’s seems many people thought that Mr Bradley was putting the “fun” in funeral. See for yourself:

Another dad seeking to have the last laugh was Joseph Heller of Centerbrook, Conn. A life-long joke-teller and “consummate napper,” his daughters fulfilled his wishes by writing a hilarious obituary describing their father’s outlandish behavior and irreverent personality.

The obituary started with a quote describing the moment the doctors confronted his daughters with the news of his condition. Upon hearing “your father is a very sick man,” they replied in unison, “you have no idea.” The obituary only got better from there.

Upon hearing “your father is a very sick man,” the daughters replied in unison, “you have no idea.”

Mr. Heller’s daughters went on to describe his lifelong dedication to pranking his family, including naming his first dog “Fart.” His mother would have to scream this name when the dog wandered off.

Mr. Heller was buried next to his wife, Irene, who died in 2015, and whom he embarrassed daily “with his mouth and choice of clothing,” according to the obituary.

The daughters also made an apology to their mother in the final line by stating, “Sorry, Mom, Lisette and I did the best we could to take care of him and keep him out of your hair as long as we could. Back in your court now.”

RIP gentlemen and thanks for the laughs.