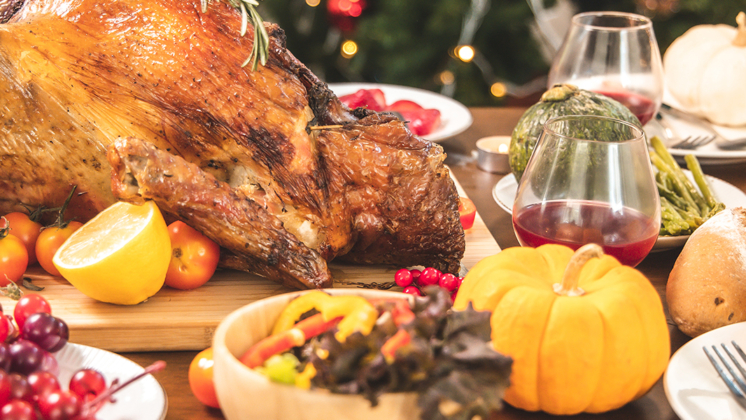 Thanksgiving on the small screen: Charlie Brown; that messy gathering on Cheers; those holiday episodes of Friends; the parade from New York City; Detroit Lions and Dallas Cowboys football; and, if you have access to station WPIX in New York, that Laurel and Hardy 1934 holiday classic, March of the Wooden Soldiers (originally known as Babes in Toyland). They all define this official gateway into the holiday season.

When ranking the best Thanksgiving-themed TV show episodes historically (comedy and drama), however, there is one show that stands above the rest…WKRP in Cincinnati. And that kicks off our Top 10 ranker of the best TV shows to feast on Thanksgiving.

Never a top-rated hit, WKRP in Cincinnati managed to become part of TV history when station owner Mr. Carlson (Gordon Jump) comes up with a Thanksgiving promotional gimmick that involves a helicopter and live turkeys. It will be “the greatest Thanksgiving promotion in radio history,” dropping live turkeys from a helicopter, according to Mr. Carlson. But the one inherent problem, of course, is that turkeys are not known for flying.

Richard Sanders as nebbish report Les Nessman was on hand for the immediate fracas, ultimately shouting, “The turkeys are hitting the ground like sacks of wet cement,” while bystanders can be seen fleeing around him.

At episode end, Mr. Carlson uttered the famous line, “As god as my witness, I thought turkeys could fly!”

Interesting fact: Howard Hesseman is remembered as disc jockey Dr. Johnny Fever on WKRP in Cincinnati. But the original choice for the role was David Cassidy (who foolishly turned it down).

What sounds pretty simplistic was, hands down, the funniest episode of the grossly underrated Bob Newhart Show. Bob Newhart as psychologist Bob Hartley, you see, does not want to spend Thanksgiving out of town with his in-laws, citing the excuse that his patients need him.

The result: The quartet gets drunk, they watch football and, inexplicably, Bob calls in to order Chinese food (specifically Moo Goo Gai Pan) over the phone. This is Mr. Newhart at his best!

It just so happened that the entire gang had no real or interesting plans for Thanksgiving. So, off they went — Sam (Ted Danson), Woody (Woody Harrelson), Carla (Rhea Perlman), Norm (George Wendt), Cliff (John Ratzenberger) and Frasier (Kesley Grammer) — to uppity Diane’s (Shelley Long) home, who hosts the holiday in a pilgrim costume.

As the gathering collapses before her eyes, a food fight ensues. At its conclusion, Diane throws a pumpkin pie to spite Sam for throwing cranberry sauce at her. The pie misses Sam but accidentally hits Norm’s never fully seen wife Vera as she enters. Vera tells Norm to fetch his coat, and Norm politely responds, “Yes, dear.”

Interesting fact: The voice of Vera, Bernadette Birkett, is also the wife in real life of George Wendt.

In this second season installment, the entire family — Roseanne (Roseanne Barr) and Dan’s (John Goodman) parents included — gather for a feast at the Conners. But Jackie (Laurie Metcalf) tells her mother (Estelle Parsons) about her new police career, which sparks a comical fracas at the holiday dinner table. Roseanne feels slighted for being just a housekeeper in her mother’s eyes. And, just when things settle down, Dan (John Goodman) is none too pleased to learn that his father (Ned Beatty) is dating family friend Crystal (Natalie West).

Interesting fact: Later in Roseanne’s original nine season run, it was revealed that Roseanne and Jackie had been physically abused by their father and that Dan’s mother had serious mental health issues. But in this episode, there was no notice of either with John Randolph as Al Harris, their father, and Ann Wedgworth as Audrey Conner, Dan’s Mom.

Can’t decide which Thanksgiving-themed episode of Friends you like the best? If so, this season five installment, featuring clips of earlier holiday episodes, will satisfy your appetite. We revisit Chandler (Matthew Perry) learning of his parents’ divorce; Phoebe (Lisa Kudrow) losing an arm (twice) in past lives; Chandler hurting Monica’s (Courteney Cox) feelings (1987); Monica getting a little more revenge than she planned, when Chandler loses a toe; and Joey (Matt LeBlanc) with his head in a turkey (1992).

Interesting fact: During the first season of Friends, the cast of six was earning a reported $22,500 per episode. But by the final two seasons (nine and ten) their per episode paycheck rose to a cool $1 million.

Once upon a time, life in the fictional Douglas family was in glorious black and white, with William Frawley (pre-William Demarest) as grandfather Francis “Bub” O’Casey and Tim Considine as Mike, the real oldest of the three sons.

In this season one Thanksgiving installment, young Chip (Stanley Livingston) decides to invite his Native American friend Johnny Squanto (Monty Ash) to the family’s gathering at the annoyance of Mike and Robby (Don Grady), who say he is a bum. When the stove breaks down, Johnny Squanto, dressed in full Native American garb, shows the family how to roast a turkey outdoors without a grill. And what was supposed to be a traditional indoors celebration, turns into an outdoor feast complete with a lesson to never judge an individual based on how he or she lives.

Interesting fact: In 1977, the cast of My Three Sons was paired with the gang from The Partridge Family for a Thanksgiving reunion special. The hosts were Fred MacMurray and Shirley Jones, and the hour featured clips from both shows and interviews with the cast.

The Clampett clan (Jed, “Granny,” Jethro and Elly May) head to the fictional town of Hooterville to spend Thanksgiving Day with the characters from Petticoat Junction and Green Acres).

Interesting fact: This episode was telecast just six weeks after the death of Bea Benaderet, who played beloved matriarch Kate Bradley on Petticoat Junction. Unlike TV series in more recent time that address the passing of an actor, the sudden absence of Kate Bradley was never explained and the arrival of June Lockhart as Dr. Janet Craig was an attempt to fill the void. Unfortunately, it was just never the same again with Ms. Benaderet.

At the height of its popularity, this two-hour season two episode of the classic family drama centered on oldest son John Boy (Richard Thomas) preparing for his college scholarship exam. While he is waiting, he has an accident at the family sawmill, which impairs his vision and delays finishing the exam. Ultimately, John Boy needs major head surgery to correct his vision and is told retaking the exam could be dangerous. But he chooses to take the risk, which results in a return to the family Thanksgiving table just before he finds out he passed the exam.

Love and prayer conquers all on The Waltons! Good night everyone.

Interesting fact: In 1993, the entire cast of The Waltons (minus Will Geer, who passed away in 1978) reunited for CBS TV movie A Walton Thanksgiving Reunion. This time, the family was mourning the assassination of President Kennedy in Dallas.

To the family’s dismay, Marie (Doris Roberts) decides to change the Thanksgiving menu after attending a senior health fair. And what should have been a plump turkey complete with all the traditional fixings morphs into an entire meal of unappetizing tofu turkey. Debra (Patricia Heaton) convinces the family to be supportive, but by episode end the family digs in wholeheartedly when Ray (Ray Romano) orders a real Thanksgiving meal from a restaurant.

Lorelai (Lauren Graham) and Rory (Alexis Bledel) have multiple invites for Thanksgiving — Lane (Keiko Agena), Luke (Scott Patterson), Sookie (Melissa McCathey) and Lorelai’s parents (Edward Herrmann and Kelly Bishop), to be exact. So, it is a frenzy in Stars Hollow until they get to Richard and Emily’s prestigious home for yet another feast. But it is at Lorelai’s parents that she learns that Rory has applied to other schools besides Harvard. And that, as the saying goes, “opens a can of worms”).

Marc Berman is the founder and Editor-in-Chief for Programming Insider. He also covers the broadcasting landscape, at present, for Forbes.com, Watch!, Newspro and C21 Media in London. His prior pieces have appeared in Campaign US, The New York Daily News, Variety, The Hollywood Reporter, The Los Angeles Times and Emmy Magazine, among other outlets.