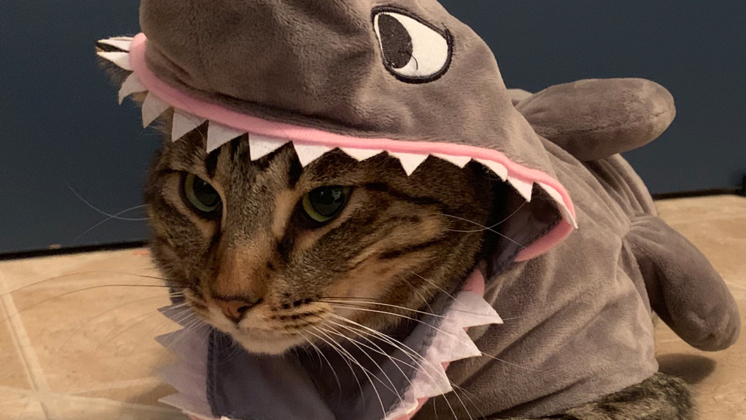 If you’ve been in contact with a small child in recent years, I can almost guarantee you’ve been subjected to “Baby Shark.” The sound “doo doo doo doo doo doo” haunts your dreams. The cry of “again, play it again” wakes you up in a cold sweat.

The national obsession with this toddler-anthem has taken over lives and even reached the Billboard charts. But as The Week pointed out, “Baby Shark” has a history as dark and murky as the waters it inhabits. The original lyrics not exactly suitable for the Peppa Pig crowd. Let’s dive in shall we?

A brief history of ‘Baby Shark’

“Baby Shark” has been around for years, but the song had a recent renaissance thanks to a Korean educational brand that launched a new version, which added a dedicated dance.

The sing-a-long track lists the members of a shark’s family beginning with the baby (scientifically known as a “pup” but who’s counting?) and then goes on to list “momma,” “daddy,” “grandma” and “grandpa” shark. Each character has an accompanying dance move.

It’s all rather sweet, but older children and parents noticed something lacking from the days they spent singing this song at summer camps.

No one knows who composed the song originally, but it has apparently been sung around campfires in the U.S. for years. In the original version there is only one shark and this shark is hungry…for human flesh.

Instead of listing the names of family members, the original lyrics listed body parts the shark had eaten. For each body part that was bitten off by the hungry shark, there was an accompanying dance move.

When the shark bit off your leg, for example, you would be forced to hop for the next verse. Like many folk songs, the lyrics varied by geographic region. According to Camp Songs, one version went like this (you can fill in the “doo doo doo doo doo doo” parts): Sharks a’coming / Lost an arm / Happy Shark / CPR / It’s not working / Now you’re dead.

One commenter recalled the lyrics like this: Hey, took a leg! / Another leg! / They took an arm! / The other arm! / They got the head! / And all were dead / And all was red.

So how was this gruesome song of death and dismemberment reborn as an annoyingly catchy ear-worm sent to torment parents and grandparents alike? Well, it’s kind of a mystery. The most likely explanation is that the song is just really catchy, and Korean pop music is so hot right now. It just seemed like a marriage made in heaven.

Heaven for the producers of the song, and hell for those of us listening for the millionth time. And if you somehow managed to escape the song so far, I’ll just drop it below to ruin/make your day. Enjoy!

Bonus: There’s a controversial new version of the alphabet song

The main difference is that the “LMNOP” (fondly and historically pronounced as “elemenopee”) part has been slowed down. It doesn’t sound like a big deal, but the video started receiving a lot more attention when writer and comedian Noah Garfinkel shared the remix on his Twitter page. “They changed the ABC song to clarify the LMNOP part, and it is life ruining,” Garfinkle declared. Continue reading…